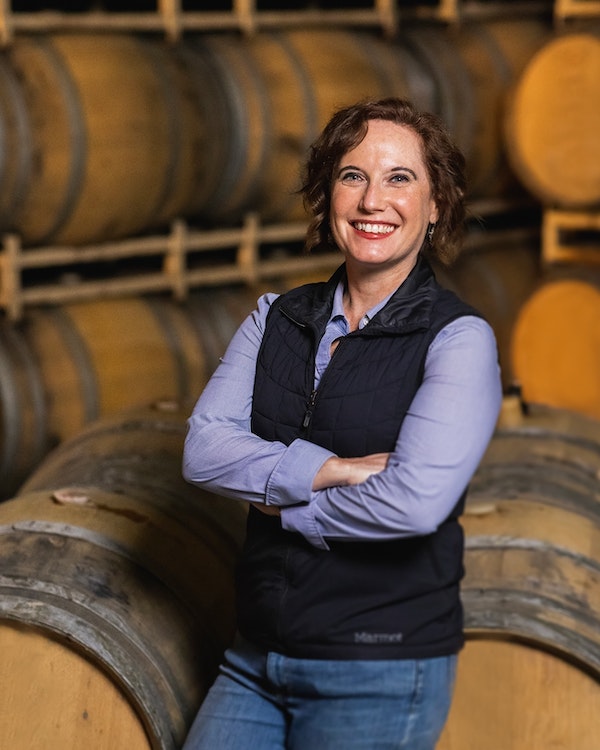 Kristen was raised in Santa Rosa by a microbiologist mother, who worked for Simi Winery, and a father who was a home winemaker. Though she grew up immersed in the wine industry, even working harvests as a summer job, it wasn’t until she traveled to Italy while earning her B.A. in Italian literature that she was inspired to become a winemaker. Encouraged by legendary California winemaker and family friend Zelma Long, Kristen became one of the first women, and the first American, to work harvest for Ruffino in Italy. Kristen went on to earn a master’s degree in enology from UC Davis, while also working a number of coveted internships, including Warwick Wine Estate in South Africa, Opus One, and Long Vineyard, where she gained invaluable knowledge working alongside her mentor, Zelma Long.

After graduation, eager to build on her growing knowledge of different wine regions, Kristen moved to Washington State, where she spent two years as the enologist at Columbia Crest. Returning to California, Kristen held positions as the assistant winemaker at Jordan Vineyard & Winery and later Belvedere Winery, before joining Handley Cellars in Anderson Valley, where she was co-winemaker with founder Milla Handley for eight years. Prior to joining J. Lohr in 2015, Barnhisel was the quality control manager at Inglenook, where she was charged with ensuring wine quality of the Rubicon, Inglenook's flagship Cabernet Sauvignon, and the Blancaneaux, the winery's top white wine.

Today, utilizing her extensive experience with cool-climate white wine varieties, Kristen works alongside President/COO Jeff Meier and Director of Winemaking Steve Peck to guide J. Lohr’s white wine program. “We are a winery that values leadership, experience and a willingness to experiment,” says Jeff. “From her work in multiple countries and appellations to her leadership role as president at the American Society for Enology and Viticulture from 2019-2020, Kristen has shown a career-long commitment to research and experimentation. She is a phenomenal winemaker.”

“I love the challenge of making serious white wines that reflect their vineyard roots,” says Kristen. “It is incredibly rewarding to take an inherently transparent grape and to find that perfect place where fruit flavors, aromatics, alcohol, acidity, texture, and palate length all come into perfect balance.”