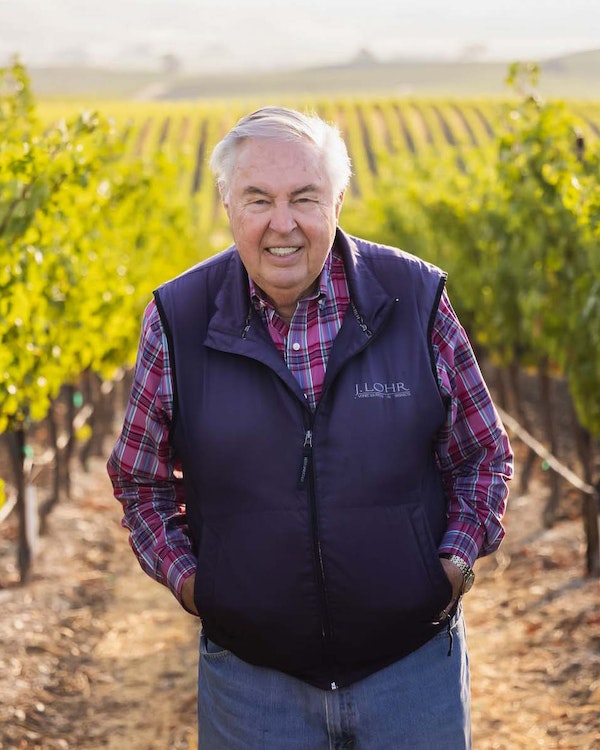 The son of a hard-working South Dakota farming family, Jerry Lohr was born and raised on what would now be considered an organic farm. The importance of planting each individual crop in its appropriate place was instilled in him from an early age, and he grew to understand that every crop has a natural ability to excel under very specific growing conditions. This knowledge would later become instrumental in his success as a winegrower.

Jerry graduated from South Dakota State University in 1958. He received an M.S. from Stanford in 1959, and completed all coursework for a Ph.D. in civil engineering by 1961 before joining the Air Force. As an Air Force captain, he was posted as a research scientist at the NASA Ames Research Center, Moffett Field, from 1961-1964. Returning to civilian life, Jerry opened a land development and custom home building business. But his passion for farming and an appreciation of wine soon led him to take on a new challenge: winegrowing.

In the late 1960s, Jerry dove headfirst into his new endeavor with an extensive investigation of California grape growing regions. Aware of the importance of climate, soil quality and location, he finally selected the Arroyo Seco region of Monterey County for his first vineyard in 1972. He was also among the first to realize the untapped promise of Paso Robles in San Luis Obispo County, and in 1986 he began planting Cabernet Sauvignon, Merlot and other red varieties there. Today, J. Lohr Vineyards & Wines farms approximately 4,000 acres of estate vineyards in Paso Robles and Monterey County, as well as 35 acres in the St. Helena appellation of Napa Valley.

Jerry is respected universally by his peers for his intimate understanding of California winegrowing; and with his vast knowledge he is able to address any facet of the winegrowing process, from the day-to-day details of vineyard management to leading-edge viticultural research. An industry leader and one of the few remaining substantial independents, he is a fervent advocate both for the Arroyo Seco area of Monterey County and for Paso Robles, regularly investing his energy and resources to champion these regions.

Jerry’s dedication goes beyond J. Lohr Vineyards & Wines. His work on behalf of the entire industry has included former posts as director and chair of the Wine Institute and chair of the Monterey Winegrowers Council. He is also one of the four founding members of Wine Vision, an industry group that promotes a long-range view of the wine industry. Additionally, Jerry founded the National Grape and Wine Initiative (NGWI), a coalition representing grape growers, processors, wineries and academic institutions committed to improving the industry. Over the course of his career, he has served as founding director, four-time president, and chair of the marketing committee of the Monterey County Vintners and Growers Association (MCVGA). He has also served as director and chair of the marketing committee for the Paso Robles Vintners and Growers Association (PRWCA).

In 2007, UC Davis honored Jerry with its Award of Distinction, and The California State Fair presented him with a Lifetime Achievement Award. The following year, 2008, he was named Wine Industry Person of the Year by the Paso Robles Wine Country Alliance. In 2010, Jerry received the Professional Excellence in Oenology award from the New York Institute of Technology, and in 2011 the California Association of Winegrape Growers (CAWG) honored Jerry with a Lifetime Achievement award. Jerry was also named the 2011 Volunteer of the Year by the District VI Council for Advancement and Support of Education (CASE) and was awarded the 2011 Merit Award from the American Society for Enology and Viticulture.

In November of 2016, Jerry was honored by the Wine Enthusiast Wine Star Awards as an “American Wine Legend.” Hailed as an “industry icon” and “a pioneering winegrower” Jerry became only the third person in the sixteen-year history of the Wine Star Awards to receive this prestigious accolade. In bestowing the honor on Jerry, Wine Enthusiast’s editor and publisher, Adam Strum, stated that, “What Robert Mondavi was to Napa Valley, Jerry Lohr is to the Central Coast, leading and elevating an entire viticultural region from Monterey to Paso Robles with perseverance, dedication and a passion for quality.”